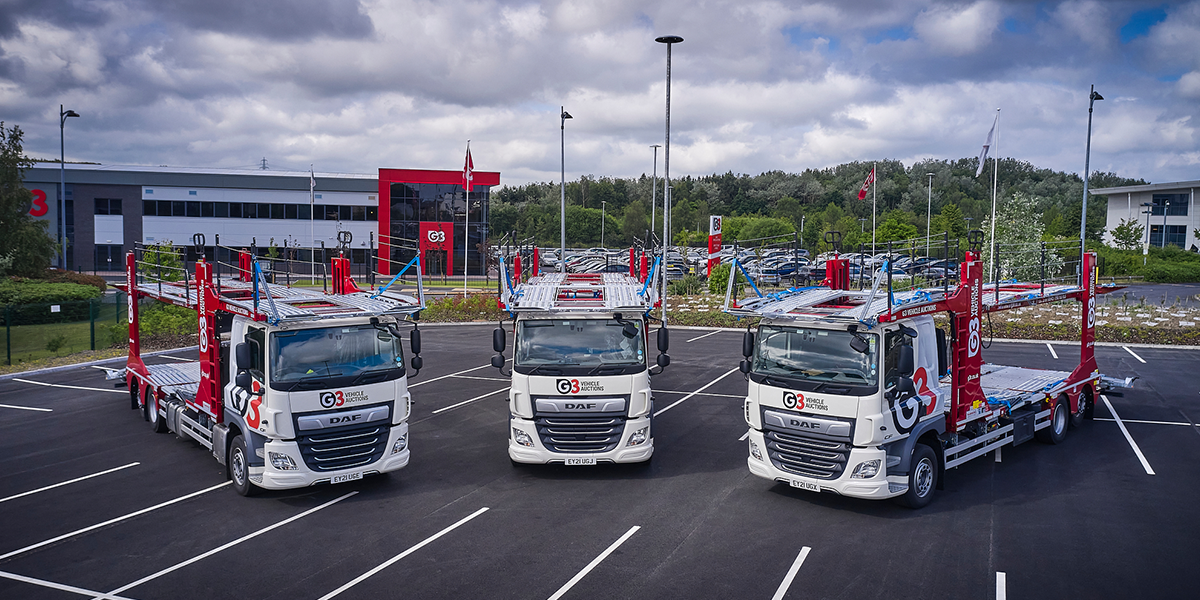 15 Jul G3 Hit The Road With New Fleet Of Transporters

Posted at 13:17h in News by Gareth Jones

G3 Vehicle Auctions have launched a fleet of specialist multi-car transporters in the first phase of significant logistic expansions required to support the growth of their state-of-the-art marketplace which opened earlier this year.

The initial half a million-pound investment of three 21 plate DAF CF340 6-car transporters and the addition of 10 new team members into the G3 business will accommodate their ever-growing vendor roster and their use of G3’s strategic network of 30+ storage centres across England, Wales, Scotland and Northern Ireland.

The strategic acquisition will deliver improved efficiencies in vehicle movements, customer service delivery and commercial economics. Each unit will be supported by a dedicated, G3 trained driver to ensure the best possible levels of client care are delivered, extending the personal touch G3 has become known for within the remarketing industry over the past 12-years.

Each of the distinct red and white G3 vehicles feature sleeper cabs and are fitted with 4 of the latest Brigade 4G-live cameras to assist and protect both the drivers and the trucks while on the road, whilst all the G3 transport team have received specialist training to assist with the swift and safe arrivals whilst at customer premises.

The second phase of the fleet will see multiple two-vehicle transporters added, which are currently in production and due to be delivered to G3 in the coming weeks. These units, along with the new six-cars all have winch capability allowing all vehicle types to be recovered without the need to utilise third party suppliers.

To oversee the expansion of the logistics team, a dedicated Transport Manager has been recruited in the shape of Steve Morton, who joins G3 having spent 25+ years running a significant transporter fleet for the UK’s largest auction company.

Morton commented on the arrival of the new fleet: “We are all excited to welcome this fleet into the business and we have already received plenty of great feedback from customers in the first week of operating.

The addition of these impressive new trucks, alongside the new drivers and myself to the team is just the start of the expansion plans the company have for the future and being based out of this fantastic new auction centre in the centre of the UK shows how G3 are perfectly placed to serve the whole of the UK with ease.”

This significant outlay further assists the business in reaching their target of 50,000 vehicles a year passing through their new G3 Castleford centre. Having already invested over £12m in the facility which opened in January 2021, the 14-acre vehicle marketplace combines the best of both digital and physical operations to deliver premium results and service levels. Read more on the new Castleford auction centre